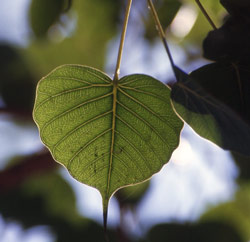 Monks answered: “No, Venerable Sir. Why is that? Because space is formless & featureless. It’s not easy to draw pictures there and to make them appear. The man would reap only a share of weariness & disappointment.”

Then the Buddha admonished that in the same way when we encounter anger and harsh speech, we should train ourselves to make our mind a sky (spacious and retaining no trace of bitterness).

[lead] “In any such event, you should train yourselves: ‘Our minds will be unaffected and we will say no evil words. We will remain sympathetic to that person’s welfare, with a mind of good will, and with no inner hate. We will keep pervading him with an awareness imbued with good will and, beginning with him, we will keep pervading the all-encompassing world with an awareness imbued with good will equal to space — abundant, expansive, immeasurable, free from hostility, free from ill will.’ That’s how you should train yourselves.” (Kakacupama Sutta, MN)  [/lead]

This may sound too difficult. Yes, indeed it is. That is why the Buddha asks us to “train” ourselves. This is a process of training. We should try this in every difficult situation in our life. We will do well in some cases and we will fail in others. Eventually we will develop this skill. First of all it is for our own benefit. However, it will also benefit many others.

If we think that this is not achievable, we have a very good example of a great person who exemplified this skill. He is none other than Nelson Mandela. He was able to make his mind spacious as sky and to retain no trace of bitterness with regard to unfair treatments, harshness and severe abuse he experienced in his life. After many years of struggling against the racial discrimination and spending 27 years in prison, he was able to forgive all those who had attempted to ruin or shatter him.

[lead]  “You must not allow hate to fester in your brain. You can never allow racism, hatred, and bitterness to rent space in your head.” Nelson Mandela [/lead]

When he was finally released, he insisted that he want to be released from the Victor Verster prison, where he spent most of his time of imprisonment. Because he wanted to thank wardens of that prison! In his words, they are “people who looked after him.” After his release, he worked with his former oppressors to bring democracy to the country. In this process he also worked hard to protect the rights of those former oppressors. His skill of forgiveness inspired his countrymen to move ahead without resentments which enabled South Africa to become the best country in the region.

He never claimed to be a saint to do this. He stressed that any person or people who has a practical sense would do what he and his people did. Because, there is no other way to move on towards freedom and progress. If we are really interested in the progress in our life, we should have a courage to let go of grudges and bitterness. We can try this with regard to our family members, our co-workers, and ex-husband or ex-wife. This will not change what has happened in the past, but will change our future. We should not focus on the justice but on the freedom of our mind. In our attempts to bring justice, we simply bring ourselves back to the vicious cycle of antagonism.

[lead] “As I walked out the door towards the gate that would lead to my freedom, I knew if didn’t leave my bitterness and hatred behind, I’d still be in prison” – Nelson Mandela [/lead]

Let us break free from our own prisons like Nelson Mandela did.

May this message be a tribute to this exemplary man.

Have a great week with a mind like space.

One thought on “Forgiveness – Nelson Mandela”

This site uses Akismet to reduce spam. Learn how your comment data is processed.